Modern times indicate why Dharma cannot be protected without Arms. Someone bears arms at the frontier so that Dharma can dance in Dharmashala. Meditation and war cannot be separated. Yoga and war also cannot be separated.
Once upon a time here lived two super humans, Nar and Narayana. Nar started tapas to get divine weapons from Adiyogi, Shiva, the greatest supplier of weapons. Suddenly a dreadful war became inevitable. ‘What right One has on another human being?’ This seemingly simple question of a woman appeared complex to many stalwarts like Bhishma, Dhritarashtra, Yudhishthir, Arjuna, Duryodhan and the Kauravas & Pandavas. What are the weaknesses of Indian mind ?
In India the greatest perseverance is the Yoga Hatha. Therefore, Victory is there, where Yogeshwar Krishna is. Even today his voice echoes from this Dharma-kshetra Kurukshetra.

Creation is Blissful. Abounds in celebration. Joyful in Rasa! Who else would manifest this, other than the trees? Ancient Indians never escaped to forest to avoid the world. Instead they aspired to be in the company of the saintly Trees.
The great spiritual aspirant Siddhartha practiced hard penance for years. When he failed to succeed, he came to take refuge under this tree. Did Pradakshina. And Namaskar. Then an army of Mara, negative forces of the mind suddenly attacked within.
Bodhisattva remained firm and resolute and after defeating Mara attained enlightenment. Earlier Boddhisattva had worshiped the Bodhi Tree. Now the Bodhi tree was worshiping the Buddha.

The story of Indian civilization is the story of mutual worship of Nature and Man. Not of exploitation. Now at the place of Buddha’s enlightenment stands this magnificent Temple. What is the meaning of a Temple?

The series is deeply researched, rightfully interpreted and beautifully filmed, from India & world sites and Museums. The series depicts the continuities of Cultural Traditions, Knowledge systems and Philosophical thoughts of India. It explores the reasons and wisdom behind the continuities of Indian Civilization and her unique identity in the world ?
This 24 Episodes series shows India's magnificent Iconography, Temple Art, Diverse Cultures, Ancient Relics, Wall paintings, Manuscripts, Meditative Music & Dance with the wisdom of India, in the most enthralling & entertaining way. 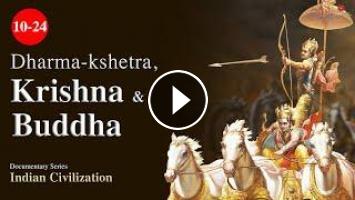 Modern times indicate why Dharma cannot be protected without Arms. Someone bears arms at the frontier so that Dharma can dance in Dharmashala. Meditat...