It is believed generally in India that when a person sets out on the way of liberation, his first problem, is to become free from his past karma.

One of the many meanings of that saying Let not your left hand though watch or write and do it is just this. And that was why in the Zen discipline, the great deal of it centers around.

Acting without premeditation, as those of you know who read Harry Gold’s book, Zen in the art of archery it was necessary to release the bowstring without first saying now.

When you know that, this moment is that all. And this moment is by it’s considered by itself. That without past and without future eternal. Neither coming into being or going out of being. There is nirvana. And there is a whole Chinese Philosophy of time based on this.

Dogan the great thirteenth century Japanese Zen Buddhist started in China, and he wrote a book called Shobo Genzo. A roshi recently said to me in Japan, that’s a terrible book. Because it tells you everything. It gives the whole secret away.

So when you throw a pebble into the pond and you make a concentric rings of waves, there is an illusion that the water is flowing upwards, and no water is flowing outwards at all. Water is only going up and down what appears to move outward is the wave not the water. So this kind of philosophical argument says that our seeming to go along in a course of time. It doesn’t really happen. 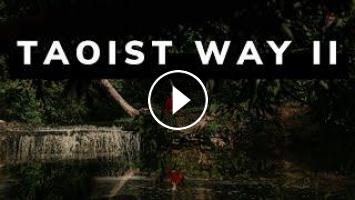 Alan Watts - Taoist Way II It is believed generally in India that when a person sets out on the way of liberation, his first problem, is to become fre...