Now as you know this is the great discussion going on in what we call today the new theology. The revolution within standard brand Christianity.

Because if you look at the design of a Catholic church. You will notice that it is based upon the design of the court room of a king. And if you look at a Protestant church you will see that it is to based upon the design of a law court. Indeed the Protestant minister whereas exactly the same robes as an American judge. And all those pews and box like stalls are the same or you will find in the old fashioned court with the witness box jury box and all that kind of thing. But you see the original idea of the Christian church these ancient Roman churches are called a basilica. That means the courtroom of the king the throne room the altar is the throne of God. Now in a court room. The king is very nervous. Because anybody who takes it upon himself to govern other people and rule them and better watch out. And therefore he always has his back to the wall. And he is flanked by attending guards and high ministers of state. And just so that nobody will get up and make trouble. He has an either on their knees or flat on their faces when they come into His presence. And of course no one law. That would laughing or miss the big.

And the world is related to God. As subjects to a king. Or as artefacts to a maker. We have of course a ceramic model of the universe because it said in the book of Genesis that God made Adam out of the dust of the ground in other words he made a clay figurine and then blew blew the breath of life into the nostrils of the figurine so that it came to life. Now the Hindus. Don’t have that model of the universe to cope with. Because they don’t look at the universe as God’s creation. In the sense of being an artifact they look at it as God’s drama. Because they. I see the world as acted not created God is that which is pretending to be all this. And everybody is really God is a mask of God who is playing that he’s you but he’s doing it so well that he’s taken himself in because he is the audience as well as the actor. It’s a really successful play. Because the good actor although you know a play is a just a play a good actor is going to try and make you think it isn’t and want to get you crying he wants to get you sitting on the edge of your seat in anticipation. And God as the best actor has convinced himself completely that the act was real.

The Chinese again have a different model. Their model of the universe is an organic one. It is a great organism. It is alive it grows it is an intelligent order. So those are the three great models of the world. When the west stopped believing seriously in Darwin long time ago they however retained the idea of the world as an artefact and so we graduated from the ceramic model of the universe to the fully automatic model. Which is actual commonsense for most people living today. I return to the point then that the clergy and the church people don’t really believe in God in the old fashioned sense of right God at all. If they did believe the Christian religion in some of its orthodox form seriously they would be screaming in the streets. 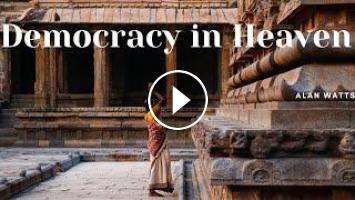 Alan Watts - Democracy in Heaven I Now as you know this is the great discussion going on in what we call today the new theology. The revolution within...