The Divine Wisdom Of Rumi

I am the dust in the sunlight. I am the ball of the sun. I am the mist of the morning, the breath of evening. I am the spark in the stone, the gleam of gold in the metal. The rose and the nightingale drunk with its fragrance, I am the chain of being the circle of the spheres, the scale of creation, the rise and the fall. I am what is and is not. I am the soul in all.

Jalāl ad-Dīn Muhammad Rūmī (Persian: جلال‌الدین محمد رومی), also known as Jalāl ad-Dīn Muhammad Balkhī (جلال‌الدین محمد بلخى), Mevlânâ/Mawlānā (مولانا, "our master"), Mevlevî/Mawlawī (مولوی, "my master"), and more popularly simply as Rumi (30 September 1207 – 17 December 1273), was a 13th-century Persian poet, Hanafi faqih, Islamic scholar, Maturidi theologian, and Sufi mystic originally from Greater Khorasan in Greater Iran. Rumi's influence transcends national borders and ethnic divisions: Iranians, Tajiks, Turks, Greeks, Pashtuns, other Central Asian Muslims, and the Muslims of the Indian subcontinent have greatly appreciated his spiritual legacy for the past seven centuries. His poems have been widely translated into many of the world's languages and transposed into various formats. Rumi has been described as the "most popular poet" and the "best selling poet" in the United States.

Rumi, 1207– 1273 CE, was a 13th-century Persian Muslim poet, jurist, Islamic scholar, theologian, and Sufi mystic. Rumi’s influence transcends national borders and ethnic divisions in the Muslim world and beyond. His poems have been widely translated into many of the world’s language. Rumi has become a widely read and popular poet, even in the US.

Like other mystic and Sufi poets of Persian literature, Rumi's poetry speaks of love which infuses the world. Rumi's teachings also express the tenets summarized in the Quranic verse which Shams-e Tabrizi cited as the essence of prophetic guidance: "Know that ‘There is no god but He,’ and ask forgiveness for your sin" (Q. 47:19). In the interpretation attributed to Shams, the first part of the verse commands the humanity to seek knowledge of tawhid (oneness of God), while the second instructs them to negate their own existence. In Rumi's terms, tawhid is lived most fully through love, with the connection being made explicit in his verse that describes love as "that flame which, when it blazes up, burns away everything except the Everlasting Beloved."

Rumi believed passionately in the use of music, poetry and dance as a path for reaching God. For Rumi, music helped devotees to focus their whole being on the divine and to do this so intensely that the soul was both destroyed and resurrected. It was from these ideas that the practice of whirling Dervishes developed into a ritual form. His teachings became the base for the order of the Mevlevi, which his son Sultan Walad organised. Rumi encouraged Sama, listening to music and turning or doing the sacred dance. In the Mevlevi tradition, samāʿ represents a mystical journey of spiritual ascent through mind and love to the Perfect One. In this journey, the seeker symbolically turns towards the truth, grows through love, abandons the ego, finds the truth and arrives at the Perfect. The seeker then returns from this spiritual journey, with greater maturity, to love and to be of service to the whole of creation without discrimination with regard to beliefs, races, classes and nations.

Here are a collection of short poetic phrases from Rumi done in the form of a meditation.

All episodes of the Reality Revolution – https://www.therealityrevolution.com

The Divine Wisdom Of Rumi 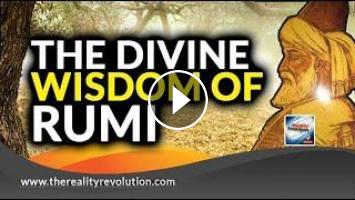 I am the dust in the sunlight. I am the ball of the sun. I am the mist of the morning, the breath of evening. I am the spark in the stone, the gleam o...