Saint Germain On Our Secret History And Using The God Power

Saint Germain is the central figure in a series of books published by the Saint Germain Press (the publishing arm of the Saint Germain Foundation). The first two volumes, Unveiled Mysteries and The Magic Presence, written by Guy Ballard as "Godfré Ray King", describe Saint Germain as an Ascended Master, like Jesus, who is assisting humanity. In these first two books, Ballard discusses his personal experiences with Saint Germain and reveals many teachings that are in harmony with Theosophy. The third volume, The 'I AM' Discourses, contains material that is foundational to the sacred scriptures of the "I AM" Religious Activity, founded in 1930 – the first of the Ascended Master Teachings religions.

Living at the base of the California volcano Mount Shasta in 1930, Ballard frequently hiked on the mountain, where he reported the following to have occurred.

It came time for lunch, and I sought a mountain spring for clear, cold water. Cup in hand, I bent down to fill it, when an electrical current passed through my body from head to foot.

I looked around, and directly behind me stood a young man who, at first glance, seemed to be someone on a hike like myself. I looked more closely and realized immediately that he was no ordinary person. As this thought passed through my mind, he smiled and addressed me saying:

"My Brother, if you will hand me your cup, I will give you a much more refreshing drink than spring water." I obeyed, and instantly the cup was filled with a creamy liquid. Handing it back to me, he said: "Drink it."[1]

The young man later identified himself as the Count of St. Germain. Ballard provided details of his encounters with St. Germain and other Ascended Masters in the books Unveiled Mysteries and The Magic Presence, using the pen name Godfré Ray King.

Guy Ballard, his wife Edna, and their son Edona Eros "Donald" Ballard (1918-1973) claimed to be the sole "accredited messengers" of Saint Germain. Their teachings constitute the original nucleus of what are today called the "Ascended Master Teachings" and are still used in "I AM" Sanctuaries all over the world.

Here is a passage from Saint Germain describing the previous history of the earth and how to use the god power.
#saintgermain #stgermain #godpower

Saint Germain On Our Secret History And Using The God Power 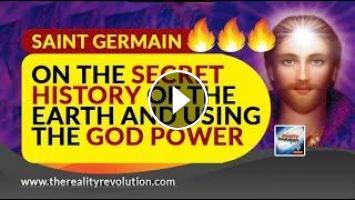