FAUST Explained: Goethe’s eulogy of the Enlightenment & its philosophical influence

Taken from episodes 41 & 42 of The Nietzsche Podcast.

Support the show on Patreon: www.patreon.com/untimelyreflections

Goethe is perhaps the most widely-celebrated author of German literature, and Faust is his most famous tale. While the historical Doctor Faustus had always been portrayed as an essentially evil man, who sold his soul to the devil in exchange for greater power, Goethe reinterpreted the story into a wager between Faust and Mephistopheles, and set it against the backdrop of a metaphysical wager between God and Satan. Faust, as protagonist, stands not for evil, but for the spirit of ceaseless striving. Having mastered all the faculties of the university, and attained the zenith of knowledge available to mankind, Faust feels his lifelong quest has been for naught. He declares: "...for all our science and art / we can know nothing, it burns my heart". His restless heart sees Faust turning to magic and conjuration in order to break past the boundaries of science, morality, or even common decency - in his neverending quest to pursue knowledge and achievement. This path leads him straight to Mephisto, who offers Faust a deal that he cannot refuse.

We’ll discuss the philosophical themes of Faust, and how they influenced the thought of Schopenhauer and Nietzsche. Then, Goethe's place in literature and a brief summary of his life and work, as well as the background of the work in question, Faust. We'll then examine in detail some of the scenes and monologues from the first scenes of the play: from Heaven's Prologue to the scene in Faust's study where the deal is struck.

After the wager is agreed upon between Faust and Mephisto, the two set off to explore the world. Mephisto takes Faust out drinking in Leipzig. Then, Mephisto procures for him a youth potion from one of his earthly servants - a witch - that takes thirty years off of Faust's life, restoring him to perfect youth. Then, while on their travels, Faust meets a young girl named Gretchen, by happenstance, and decides he must have her, forcing Mephisto to help him in this endeavor. Most of the rest of part one then deals with this storyline as it unfolds: the "Gretchen Tragedy", in which an innocent, devout young woman falls in love with a charming, mysterious stranger - only to have her heart broken, her family destroyed, and her life ruined. In his endless quest for new experiences, Faust is willing to take on all pain, all pleasure, all triumph, all calamity. But what about when Faust brings tragedy onto others? And what if it is the very woman he loves who suffers the most because of his actions?

While part two of Faust is impossible to summarize, we'll then do our best of covering that material, and then, of course, the masterful final scene of the play, written more than fifty years after the first lines were first put to parchment. Goethe's Faust ultimately reveals to us the story of Faust's entire life, and thus could only be written over the course of a lifetime by Goethe. Join me in exploring this great work of world literature, which seeks to redeem the dissatisfied, wayward aspect within the Enlightened mind.

FAUST Explained: Goethe’s eulogy of the Enlightenment & its philosophical influence 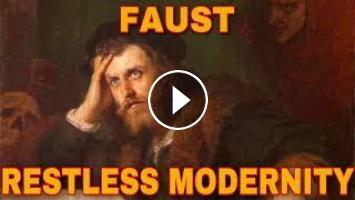 Taken from episodes 41 & 42 of The Nietzsche Podcast. Support the show on Patreon: www.patreon.com/untimelyreflectionsGoethe is perhaps the most w...