Many people today are afraid of malignant thought projections, black magic, the evil eye, voodoo, etc.; there seems to be a general fear that there is some sort of hidden power that others can use to hurt them or to mar their happiness. The Greatest Secret Within Man You will truly lead a full and happy life when you awaken to the greatest of all truths

The Superstitious Origin of Black and White Magic When we were very young and highly impressionable, our parents, who didn’t know any better, told us about a punitive God and also about a devil who would tempt us; they also cautioned us that, if we were very bad, we might go to hell and suffer forever.

Children and childish minds think only in pictures or mental images and, not knowing anything better, they project images of God and a devil. Children envision God up in the heavens on a golden throne surrounded by angels, and the devil down below in the flames of hell, not realizing that, in fact, all of us create our own heaven and our own hell by the ways in which we think, feel and believe. Primitive man attributed pleasure to the gods and all pain, suffering and misery to evil spirits or to devils of his own creation. Prehistoric man realized that he was subjected to strange forces over which he seemed to have no control. Earthquakes and floods took place and, not knowing the cause, the jungle priests said that the gods were angry; then they proceeded to offer up sacrifices to appease the angry wrath of the supposed gods.

The sun gave man heat, but in a prolonged drought, the same sun seemed to scorch the earth. Fire warmed man, but it also burned him; the thunder terrified him; lightning paralyzed him with fear; the waters flooded his lands, at times; his cattle and children were drowned. His understanding of external powers consisted of primitive and fundamental beliefs in many types of gods. From this crude and ignorant reasoning, primitive man proceeded to supplicate the intelligence of the winds, the stars and the waters, hoping they would hear him and answer his prayer. He proceeded to make offerings and sacrifices to the gods of the wind and the rain. Primitive man divided the gods and genii into beneficial and malignant powers. Hence, you will find the universality of these two powers in all the beliefs of millions of people. A belief in two powers is a hangover from these age-old superstitious beliefs.
#nevillegoddard #audiobooks #imagination #newthought #lawofattraction #totalhumanoptimization 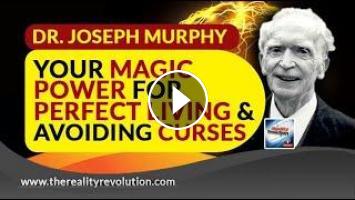 Many people today are afraid of malignant thought projections, black magic, the evil eye, voodoo, etc.; there seems to be a general fear that there is...