This is a rare talk from Chögyam Trungpa on Zen & Tibetan Buddhism.

Among his contributions are the translation of numerous Tibetan Buddhist texts, and the introduction of the Vajrayana teachings to the West. Trungpa coined the term crazy wisdom. Some of his teaching methods and actions, particularly his heavy drinking, womanizing, and the physical assault of a student and his wife, caused controversy during his lifetime and afterward. 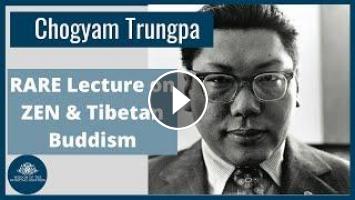