Bhagavan Ramana Satsang - Abide in Silence of Pure Self

16th May 2022
These recordings are from live Satsangs at Bhagavan Sri Ramana Maharshi Centre in Melbourne, Australia. All the pointers during the Satsang are compiled by Dr Vidya Narasimhan.
Satsang is a Sanskrit term derived from two roots: sat meaning "true’" and sangha meaning community, company, or association. It can be translated as "associating with good people" or simply "being in the company of truth," and refers to the act of gathering with Sattvic-minded, uplifting beings, especially spiritual seekers.
Satsang is different from any course or lecture because the energy field in it allows for clarity, stillness, and expanded awareness to be experienced by those who seek it.
Whenever something increases your awareness of the Truth, it opens your Heart and quiets your mind.
Satsang is one of the most effective means of transcending your mind and staying in the egoless state which can be called enlightenment, liberation, freedom, moksha, nirvana or simply abiding in Self.
We call our Satsang lovingly as Bhagavan Satsang as they are all due to his grace, Bhagavan Sri Ramana Maharshi.
According to Bhagavan Sri Ramana Maharshi Satsang means only Atma Sang(Association with Self). Those who are trying to be in Self can come in the company of realized beings/Sadhus/Saints/Sages and that is also Satsang. Those who come in the company of Jivanmuktas also become Jivanmuktas.
Bhagavan explained the importance of Satsang by quoting Tayumanuvar, Suta Samhita, and Kaivalya Navanitam.
Bhagavan Sri Ramana Maharshi is widely thought of as one of the most outstanding Indian spiritual teachers of recent times. Having attained enlightenment at the age of 16, he was drawn to the holy mountain of Arunachala in southern India and remained there for the rest of his life. Arunachala mountain itself is considered to be self-manifested Lingam, an incarnation of Lord Shiva. Just by looking at it with reverence liberation will happen.
Attracted by his stillness, quietness, and teachings, thousands sought his guidance on issues ranging from the nature of God to daily life.
The philosophy of Advaita or Non-Duality has become, along with Buddhism, one of the most popular spiritual paths being pursued by those interested in enlightenment today. During the past three decades, Advaita has become more widely recognized in the West through the ever-growing popularity of Ramana Maharshi. His point of view has for its aim Self-realization. The central path taught in this philosophy is the inquiry into the nature of Self, the content of the notional 'I-thought'. Carl Jung wrote of Ramana: “Sri Ramana is a true son of the Indian earth. He is genuine and, in addition to that, something quite phenomenal. In India, he is the whitest spot in a white space. What we find in the life and teachings of Sri Ramana is the purest of India; with its breath of world-liberated and liberating humanity, it is a chant of millenniums.”
Om Peace Peace Peace.
For more information:
https://www.sriramanamaharshi.org
https://www.sageramana.org/
https://www.consciouscircle.com.au
#Advaita #Nonduality #Spirituality #Ramana #Satsang #Meditation

Bhagavan Ramana Satsang - Abide in Silence of Pure Self 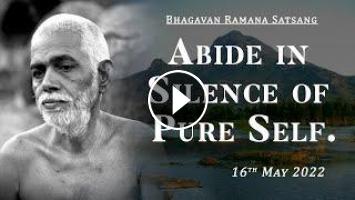 16th May 2022These recordings are from live Satsangs at Bhagavan Sri Ramana Maharshi Centre in Melbourne, Australia. All the pointers during the Satsa...