In the philosophy of the Tao, iIt is said, it’s always being said this is. You read this in every art book about Chinese art that in Chinese painting, man is always seen as in nature rather than dominating it.

then is the great fundamental principle which is called wu-wei, which is not to force anything. I think that’s the best translation . Not doing, not acting, not interfering, but not to force seems to me to hit the nail on the air. Like don’t ever force a lock while you bend the key or break the law you jiggle until it revolves.

There’s a poem which says that when the bird calls. The mountain becomes more mysterious. You imagine for example you’re in a mountain valley and everything is very silent. And suddenly a crow. Squawks somewhere. You don’t know where that crow is, and the little sound emphasizes the silence.

There’s a Chinese poem which puts it this way. It is a poem written by a man who has gone to find a sage in the mountains and the Sage has a little hut at the foot of the mountain and a boy there who is his servant. I asked the boy beneath the pines he said the master’s gone alone herb-gathering somewhere on the Mount. Cloud-hidden, whereabouts unknown.

Now when we take a stick, the stick has its two ends. They are the terms of the stick, but the ends of the stick do not exist as sort of separate points which encounter each other on the occasion of meeting at a stick. 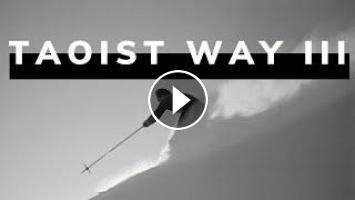 Alan Watts - Taoist way III In the philosophy of the Tao, iIt is said, it’s always being said this is. You read this in every art book about Chinese a...