The philosophy of the Tao is one of the two great principal components of Chinese thought. There are of course quite a number of forms of Chinese philosophy, but there are two great currents which have fairly molded the culture of China and they are Taoism and Confucianism.

So, it’s sort of like this that when you have contributed to society when you’ve contributed children and brought them up, and you have assumed a certain role in social life. You then say Now it’s time for me to find out what it’s all about, who am I ultimately behind my outward personality. What is the secret source of things?

The Tao is not something different from nature, from ourselves, from our surrounding trees and waters and air. The Tao is the way all that behaves. And so the Chinese, the basic Chinese idea of the universe is really that it’s an organism.

So that nowhere can you find the controlling center there isn’t any. The world is a system of interrelated components none of which can survive without each other. Just as in the case of bees and flowers. You will never find. These around in a place where there aren’t flowers and you will never find flowers around in a place where there aren’t bees or insects that do the equivalent job. And what that tells us secretly is that although bees and flowers look different from each other they’re inseparable. 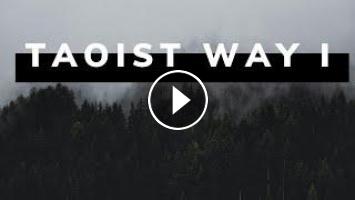 Alan Watts - Taoist Way I The philosophy of the Tao is one of the two great principal components of Chinese thought. There are of course quite a numbe...