When as one is baptized as a child and you don’t know anything about it, and your godfathers and godmothers are yours sponsors, then there comes a time when you are about to enter into puberty, when you are confirmed, when you undertake for yourself your own baptismal vows.

Both Jews and Muslims think that God’s creation of beautiful women was a grand idea. In the Arabic book that is the Islamic version of the Kama Sutra known as The Perfumed Garden, the book opens with a prayer to Allah that is a very full, detailed thanksgiving for the loveliness of women, with which Allah has blessed mankind. In the Book of Proverbs, we are enjoined to enjoy our wives while they are young.

If you look at Tibetan Buddhist iconography and their images, or you look at Hindu temples, you will find things that Europeans and Americans have never been able to understand. Here are images of buddhas and of the gods engaged in amazing diversions with their female counterparts. Everybody thinks that these are kinds of dirty sculptures, but they are nothing of the kind. They are saying to the people who look at them that the play of man and woman is, on the level of biology, a reflection of the fundamental play of the cosmos.

The play of positive and negative principles, of the light and the dark, of the mental and the material, they all play together. And the function of sexual play is not merely the survival and utilitarian function of reproducing the species, as it is among animals to a very large extent.

they have never understood, neither the church nor the opponents of the church, has clearly understood that the secret of unconscious motivation of sexual repression is to make it all more interesting. And on the other side, it has never been clearly understood that sexual biology and all that goes with it, is a triggering forth, on the level of biology, of what the whole universe is about – ecstatic play.

Let’s take an entirely different analogy, let’s take a given biological group, a species we will call A. It has a natural enemy, B. One day A gets furious at its natural enemy B and says, “Let us obliterate B.” They gather their forces and knock out their natural enemy. Suddenly, after a while, they begin to get weak, they get overpopulated. There is nobody around to eat up their surplus members, and they do not have to keep their muscles tensed against any enemy. They begin to fall apart because they have destroyed their enemy. What they should do is cultivate the enemy. That is the real meaning of “Love your enemy.” There is such a thing as a beloved enemy. And if you don’t have a beloved enemy, another words if the flies and the spiders don’t go together, there would be too many spiders or too many flies. These balances keep the course of nature going, what is exactly the same thing as between the libertines and the prudes. They need each other. And you should thank, if you have a prudish father and mother, you should be very grateful to them for having made sex so interesting. 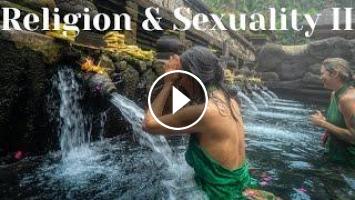 Alan Watts - Religion & Sexuality II When as one is baptized as a child and you don’t know anything about it, and your godfathers and godmothers are y...