I don’t think I need to tell you that in a very special and peculiar way, Western man is hung up on sex. The major reason for this is that he has his religious background, quite unique among the religions of the world. I mean specifically Christianity, and in a secondary way, Judaism, insofar as Judaism in Europe and the United States is strongly influenced by Christianity. Christianity is, of all religions in the world, the one uniquely preoccupied with sex, more so than priapism, more so than tantric yoga, more so than any kind of fertility cult that has ever existed on the face of the earth. There has never been a religion in which sexuality was so important.

You study for example, the Roman Catholic manuals of moral theology, these manuals of moral theology are technical books about sins of all kinds – just exactly what they are, how they are done, how grave they are – mostly for the advice of confessors. They are always arranged according to the Ten Commandments, and when they get to the command “Thou shalt not commit adultery” the volume expands (like this), in fact it occupies two-thirds of the whole book, all the details.

You can say very simply that this is all bad and something very wrong, but I want to point out that there is another side to all this. There is no way of making a hedge grow like pruning it. There is no way of making sex interesting like repressing it. And as a result of all these centuries of sexual repression and associating it with dirt, the West has developed a peculiar form of eroticism. That is an aspect of this whole problem that I do not think is really very profitable to explore, but I just want to mention in passing that the whole attitude of anti-sexuality in the Christian tradition is not as “anti” as it looks. It is simply a method of making sex prurient and exciting in a kind of dirty way. I suppose it is to be recommended to people who are not feeling very frisky and need to be pepped up. 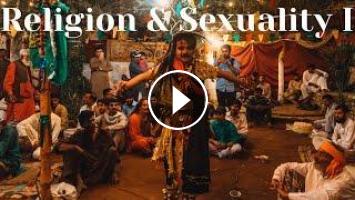 Alan Watts - Religion & Sexuality I I don’t think I need to tell you that in a very special and peculiar way, Western man is hung up on sex. The major...