Some years ago, I had just given a talk on television in Canada when one of the announcers came up to me and said, “You know, if one can believe that this universe is in the charge of an intelligent and beneficent God, don’t you think He would naturally have provided us with an infallible guide to behavior and to the truth about the universe?” Of course I knew he meant the Bible. I said, “No, I think nothing of the kind, because I think a loving God would not do something to His children that would rot their brains.” Because if we had an infallible guide we would never think for ourselves, and therefore our minds would become atrophied. It is as if my grandfather had left me a million dollars, and I am glad he didn’t. And we have therefore to begin any discussion of the meaning of the life and teachings of Jesus with a look at this thorny question of authority, and especially the authority of Holy Scripture.

I will even grant the miracles, because speaking as one heavily influenced by Buddhism, we’re not very impressed by miracles. The traditions of Asia – Hindu, Buddhist, Taoist, and so forth – are full of miraculous stories, and we take them in stride. We don’t think they are signs of anything in particular except psychic power. We in the West have, by scientific technology, accomplished things of a very startling nature. We could blow up the whole planet, and Tibetan magicians have never promised to do anything like that. And I really am a little scared of the growing interest in psychic power, because that’s what I call psychotechnics. And we have made such a mess of things with ordinary technics that heaven only knows what we might do if we got hold of psychotechnics and started raising people from the dead and prolonging life insufferably and doing everything we wished.

The whole answer to the story of miracles is simply: imagine that you are God, and that you can have anything you want. Well, you’d have is for a quite long time. And after a while you would say, “This is getting pretty dull because I know in advance everything that is going to happen.” So you would wish for a surprise, and you would find yourself this evening in this church as a human being. So I mean that is the miracle thing. I think miracles are probably possible. That doesn’t bother me, and as a matter of fact, when you read the writings of the early fathers of the church, the great theologians like Saint Clement, Gregory of Nyssa, Saint John of Damascus, even [Saint] Thomas Aquinas, they are not interested in the historicity of the Bible. They take miracles for granted, but forget it. They are interested in it’s deeper meaning. And therefore they always interpret all the tales like Jonah and the whale tale. They don’t bother even to doubt whether Jonah was or was not swallowed by a whale or rather big fish, but they see in the story of Jonah and the whale the prefiguration of the resurrection of Christ. And even when it comes to the resurrection of Christ they are not worrying about the chemistry or the physics of a risen body. What they are interested in is that the idea of the resurrection of the body has something to say about the meaning of the physical body in the eyes of God. The physical body, in other words, is not something worthless and unspiritual but something that is an object of the Divine Love. Therefore, I am not going to be concerned with whether or not miraculous events happen. It seems to me entirely beside the point. 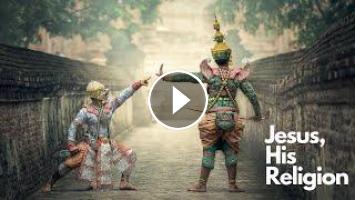 Alan Watts - Jesus, His Religion Some years ago, I had just given a talk on television in Canada when one of the announcers came up to me and said, “Y...