The very fact that you are here, at all, to listen to this sort of thing, indicates as all philosophy indicates, that there is some unrest. That to be a human being is in some way problematic. That there is such a thing as a life problem. And different people have different ways of expressing it. But there is the reality of what is called in Buddhism, dukkha, a very comprehensive word generally translated “suffering”. But which might more accurately be called chronic frustration.

It’s like this has happened in the past in the course of evolution, there was a prehistoric animal called titanite [sic]. Which was a sort of forbear of the rhinoceros. And it had a nose horn which was of course a very useful weapon. But this thing kept developing the nose horn because it was so useful until it got bigger and bigger and bigger and at last the creature couldn’t hold its head up and it became extinct- too much of a good thing. The dinosaurs, became too big, they found bigness was an advantage over other animals but they overdid it- they had to have one brain in the head and another in the rump. So that some caveman you know has a pet dinosaur and when he goes to bed at night he takes his club and bangs it on the tail and it screams in time to wake him up in the morning. So it became extinct. So the human being can become extinct through overdoing his head, by thinking too much. 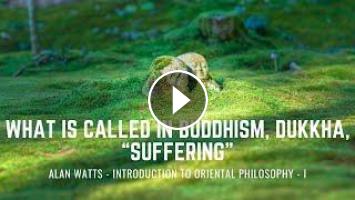 Alan Watts - Introduction to Oriental Philosophy - I The very fact that you are here, at all, to listen to this sort of thing, indicates as all philos...