Now I’m sure most of you know the old story about the astronaut who went far out in space and was asked, on his return, whether he’d been to Heaven and seen God. And he said, “Yes.” And so they said to him, “Well, what about God?” And he said, “She is black.” And although this is a very well known and well worn story, it is very profound.

I’ve read a great deal of theological reasoning about the existence of God, and they all start out on this line: If you are intelligent and reasonable, you cannot be the product of a mechanical and meaningless universe. Figs do not grow on thistles, grapes do not grow on thorns. And therefore, you—as an expression of the universe, as an aperture through which the universe is observing itself—cannot be a mere fluke.

she’s black. Imagine, instead of “God the Father,” “God the Mother.” And imagine that this is not a luminous being—blazing with light—but an unfathomable darkness, such as is portrayed in Hindu mythology by Kālī—the great mother—who is represented in the most terrible imagery. Kālī has a tongue hanging out long, drooling with blood. She has fang teeth. She has a scimitar in one hand and a severed head in the other. And she is trampling on the body of her husband, who is Shiva.

Nobody can imagine what consciousness is. It’s the most elusive whatever-it-is that there is at all, because it’s the background of everything else that we know. Therefore, we don’t really pay much attention to it. We pay attention to the things within the field of consciousness: to the outlines, to the objects, to the so-called things that are in the field of vision, the sounds that are in the field of hearing, and so forth. But whatever it is that embraces all that, we don’t pay much attention to it. We can’t even think about it. It’s like trying to look at your head. You know? You try to look at your head and what do you find? You don’t even find a black blob in the middle of things. You just don’t find anything. And yet, that is that out of which you see, just as space is that out of which the stars shine.

So this, then, is the value of the symbolism of “She is black.” She—the womb principle, the receptive, the in-standing, the void and the dark. And so that is to come into the presence of the God who has no image. Behind the father-image, behind the mother-image, behind the image of light inaccessible, and behind the image of profound and abysmal darkness there’s something else which we can’t conceive at all. Dyonysius the Areopagite called it the “luminous darkness.” Nagarjuna called it śūnyatā: “the void.” Shankara called it Brahman: “that of which nothing at all can be said.” Neti neti; beyond all conception whatsoever. 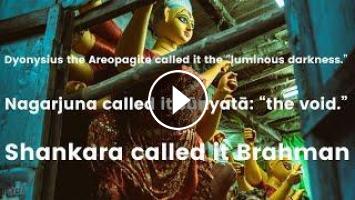 Alan Watts - Images of God Now I’m sure most of you know the old story about the astronaut who went far out in space and was asked, on his return, whe...