In talking about these two great religious traditions in terms of images, I am talking about the way they express themselves at a rather popular level. Sophisticated Christians and sophisticated Hindus think beyond images. For example, a Christian may think of God as the father, but a sophisticated and educated Christian does not imagine that God is a cosmic male parent with a white beard sitting on a golden throne above the stars. Nor does a Hindu imagine literally that God is the super showman, the big actor.

The general result of the Western image of man hasn’t been quite that. What it is come down to, under the dispensation of the fully automatic model, is this: we are living beings, we’re very sensitive, and inside the human skin, by an extraordinary fluke of nature, there has arisen something called reason. There have also arisen “values,” such as love. But these was a fluke because it happened inside a fully automatic universe which is stupid, because it is merely automatic. You won’t, another words, find anything really intelligent outside human skins.

Each one feels himself to be a globule of consciousness or mind living inside a vehicle called “my body.” Since the world outside that body is stupid, we feel estranged from the world.

When we find out how enormous the universe is, that makes us, as individuals, feel extremely unimportant and rather lonely, because you see, we consider ourselves, our basic image of ourselves is of a soul or an ego or a mind, or by itself in its little house, looking out at a world that is strange, and that is not me. I am therefore a brief interval of consciousness between the darkness and the darkness.

Now I want to contrast this image of the world with another, what I call the dramatic image, as distinct from the image of the potter or the ceramic image. And this will be the presiding image of Hinduism. Their idea is this: that God did not make the world like a technologist, but he acted it. That is to say, every person and every thing for that matter, every tree, every flower, every animal, every star, every rock, every grain of dust is a role or part that the Godhead is playing.

But the Hindus don’t think of God that way. If you ask the Hindu God, “How did you create the human body?” He would say, “Look, I know how I did it, but it can’t be explained in words because words are too clumsy. In words I have to talk about things slowly. I have to string them out, because words run in a line, and lines add up to books, and books add up to libraries. And if I explain to you how I made the human organism, it will take all eternity for me to tell you. Unfortunately to me I don’t have to understand things in words in order to make them happen. Nor do you.” You don’t have to understand in words how you breathe. You just breathe. You don’t have to understand in words how to grow your hair, how to shape your bones, how to make your eyes blue or brown, you just do it. And somebody who does understand to some extent, maybe physiologist, he can’t do it any better than you.

- Image of Man by Alan Watts 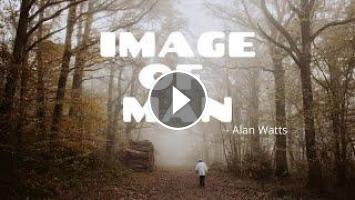