Do you do what do you do do you put your mind into two watertight compartments one of which you’re abreast of science in the modern world and all that kind of thing in the other compartment it’s again nothing to do with that is it completely cut off think all religion where you believe in absolutely ludicrous propositions. A lot of people do that but a lot of people want a religion which is difficult to believe in because that’s a kind of a test of faith but you can swallow it. It’s like the story about Abraham being told to sacrifice his son Isaac and he was about to do it because he wouldn’t do what you’re told to testify if. You. Are people like the security. Of a definite religion I mean you’ve got to believe in and this is the truth I was once having an argument with a Jehovah’s Witness. And he said Don’t you think that if there were really a loving God who was concerned about the human race that he would provide us with an infallible textbook that would tell us how to live and I said he would do nothing of the kind it would completely destroy the human mind. You know you never have to think that was the case. And so. While there is that there is then this possibility is it to be no god is a life just this trip around the maternity ward to the crematorium. And that the issue of religion is to improve that trip. That is to say through social concern. Through getting rid of poverty and war and exploitation and disease is that the whole business of religion or is there something else. Those who take this field which we will call the secularist position and reality are parts strongly. Influenced by contemporary philosophy especially in that form which is called scientific imperialism. Or logical positivism. Which maintains that the idea of a god is not a fantasy. But is a meaningless idea. That in other words the proposition that there exists god. And that God is the origin and Creator and governor of everything that is happening they maintain that those sentences are utterly devoid of meaning. As much so as if I were to say everything is up because they will say no logical proposition can be made. About all processes whatsoever because all propositions are labels on boxes. And you can’t have the box containing all boxes because this box would have no outside and therefore it wouldn’t be a box. 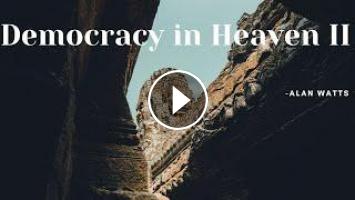 Alan Watts - Democracy in Heaven II Do you do what do you do do you put your mind into two watertight compartments one of which you’re abreast of scie...